From the Washington Naval Treaty to the end of the Second World War.
Post Reply
5 posts • Page 1 of 1 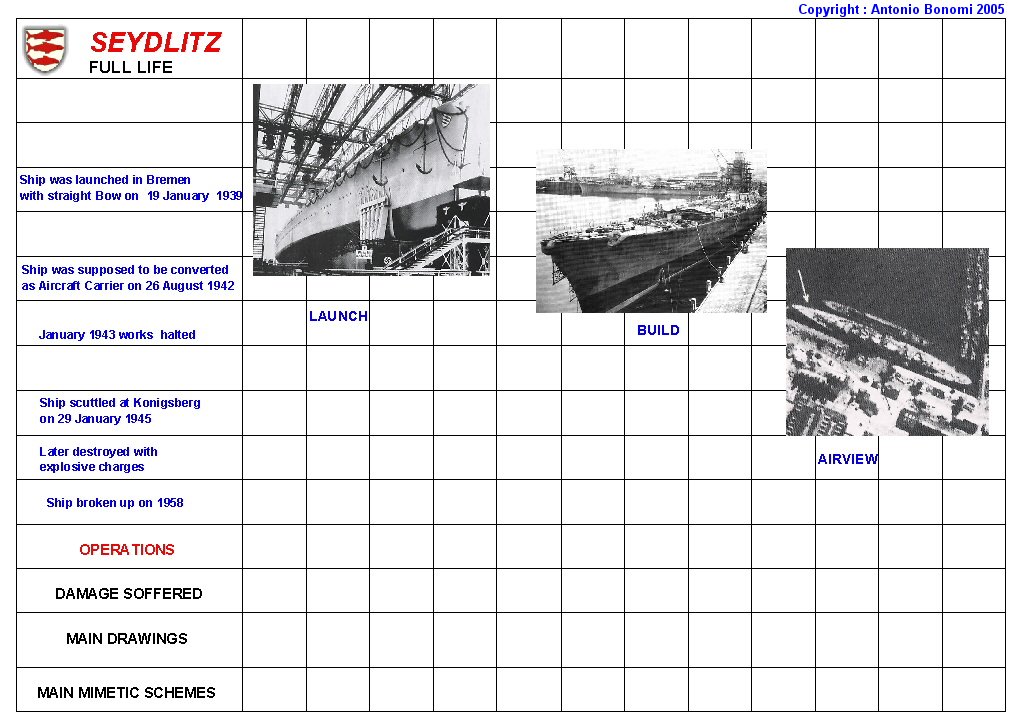 My memory fails me, what class ship was it to be? Another battlecruiser? That's what it appears to be.
Top

Ciao Djoser and all,

it was a Prinz Eugen class heavy cruiser, like Lutzow.

It was never completed as cruiser.

Works started to transform it on a ligh aircraft carrier ( Aug 1942 ) and was never completed as well ( works stopped after January 1943).

It was than scuttled on 1945 at Konigsberg.

How much bearing might the loss of sister Blucher on 9 April 1940 have had on the decision to suspend further work on Seydlitz, bearing in mind the final incomplete unit Lutzow had been sold to the Soviets previously.
The exploits of both Admiral Hipper and Prinz Eugen are well documented, the 8" cruisers, of all navies, were most handy.

Was this the commencement to purging of the surface fleet in favour of underwater warfare.
If so, the fates of all the larger German warships was sealed that day Blucher was so uncerimoniously dispatched.
A full broadside. The traditional English salute.
Thanks. Sean.
Top

There is much agreement now that this entire line of warships were a waste of resources. Even at the time; their existence is owed to a compromise that Raeder clawed out of Hitler, who wanted no surface fleet at all....other than for coastal protection.

When Hitler took power a naval plan had just been written into law by Parliament. This plan authorized 6 more enlarged PBS [3 triple 11" turrets & more armor] plus an aircraft carrier [modeled on HMS Glorious aircraft carrier] & 6 CL [something between L class & M class?].Within a year of Hitler's rule this plan blurs , with no reference to the light cruisers or carriers anymore, but exclusively on better & better PBC. They evolve from.....

In 1934 discussion , Raeder convinced Hitler that a couple of 14” gun battle cruisers were needed to counter the two French battle cruiser dunkerque, so work began to evolve the D-3 designs to handle 3 twin 14” gun turrets and orders were placed for 2 x cruisers plus 3 x 35kt battle cruisers - only to have Hitler demand triple 11” C34 turrets instead of the twin 14” gun turrets. Raeder shortened the order to two & two and tried again with a pair of Bismarck battleships to counter the two French Richelieu battleships plus another three cruisers to complete these orders.

They should never have been built in the first place, but as to the specifics of you question it happened as a by product of Hitler sacking Raeder in 1943 after some dismal naval battles .
"Eine mal is kein mal"
Top
Post Reply
5 posts • Page 1 of 1