Size of ships and their guns

Size of ships and their guns

Gentlemen,
Further to my post on Monitors ,I have read somewhere that both the the RN and Germany were considering building ships with 18" and larger guns, Although it now seems like a 'pipe dream' after the advent of the aircraft carrier, I have often wondered if there was a practical limit to what size of gun (which presumably would dictate the size of ship) that could be built and even if the Yamato class was actually a step too far as regards reliability and actual handling in battle conditions. I believe the Yamato topped out at close to 70,000 tons under full load which would be a big ship even today, it would be interesting to guess what size of ship would be needed to take 20" or larger weapons, at the same time I presume that rate of fire would also be affected as I would imagine a 20"shell (or larger) would weigh close to a couple of tons and need extremely strong loading mechanizes, so perhaps the 16" was about as far as it could go for practicality.
Top

Hi Paul, the numbers for H classes can be found in Dulin&Garzke.

H-42 is bigger than Yamato with less armament.
H-43 and H-44 had 20" guns. The size is awesome. There would be no dry dock for them available. The draft was 13/14 m, they would have trouble entering many ports, on the Jade for example. Would they pass the Kiel canal? A waste of money in my opinion.
Top

Thanks Marcello
That's pretty awesome they are all heavier than all of the current US carriers, But as i said in my post I wonder if 18" or 20" or larger guns were actually practicable and that perhaps the 16" triple was the best compromise?
Top

Well, you have very few instances of guns bigger than 16" at sea. On the other side, on land the biggest gun was the 800mm Gustav. Could it be mounted afloat? Let see:

-the barrel is 32 m long, they would take a considerable space on deck
-the shell weights 7 t, for a 4 gun ship providing 100 shells per gun would weight 2800 t
-rate of fire, on land 1 shot every 30 min, useless at sea, may be it can be bettered with better mechanisms?

Hi marcelo,
with one shot every 30 minutes i would have thought that a 16" gun ship would have pounded the bigger ship to bits by the time they got a couple of shots off! As I said in another post, perhaps 16" guns were the practical limit as regards size of ship to hold them, rate of fire etc. Imagine the strength of mechanism needed to hold up a barrel of that length - let alone two or more.
Top

Yes, just look to the photos of the land version and you get a glimpse of the mechanisms involved. There would be more complexities for sea use, for example I don´t know if a chain rammer would be able to push the 3 t shell into the breech. The recoil would be heavy, somehow you have to provide space for it and strength to the structure. As you said, about 40 cm seems to be a practical upper limit.

proposed gun caliber for H42 ff. would be 45 cm(C42h) or 50 cm(C42i) guns
Range at 40° Elevation near 50 km. So these guns were'nt practically usable for a considerable part of the possible range. 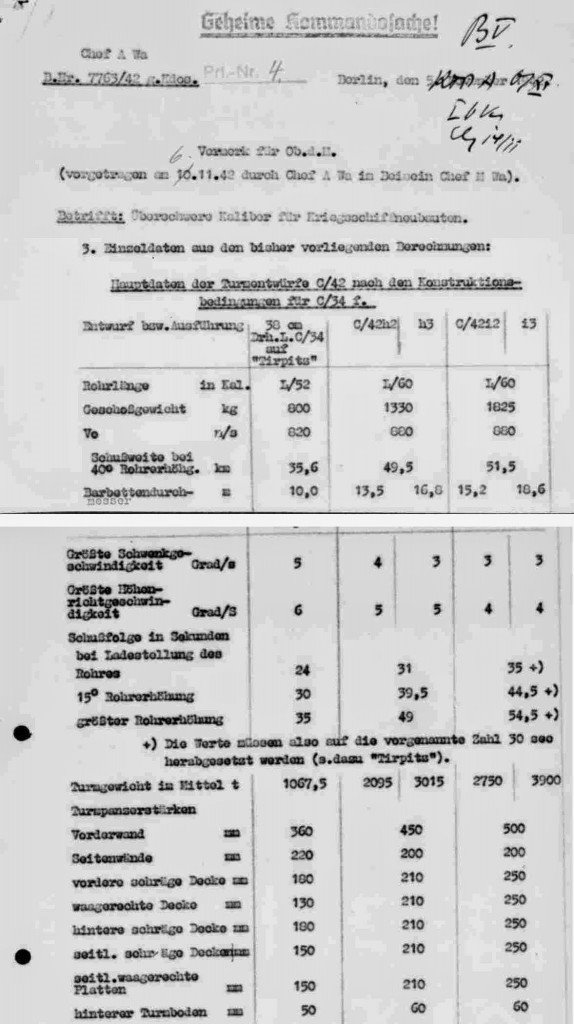