Hi guys. I just saw this image of the paravane system used on Bismarck: 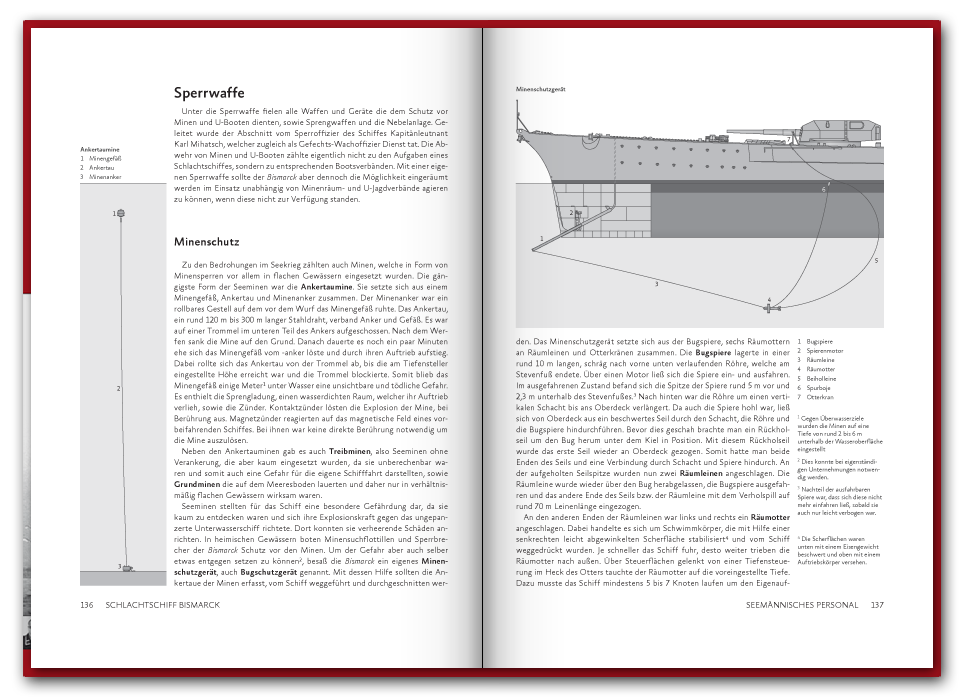 Can someone explain how the system worked? The pole is somehow pull out of the stem? How is the towing cable attached?

Let me have a go at an explanation. Most ships have two continuous loops of chain passing down from either side of the bow through a ring at the forefoot of the bow. A tow wire to the paravane is shackled to a loop at the bow and then the looped chain chain pulled through to take the towpoint down to the forefoot. The ship is underway at a moderate speed. The paravane is lowered into the water further aft and its other line paid out by a winch as the paravane "flies" in the water, close to the surface because it has a buoyant body, not as confusingly drawn, at depth. With a paravane on either side the tow wires should divert any moored mine cable in the vessel's path out to the paravane where a set of cutting teeth should sever it allowing the mine to float to the surface. Penetrating shots to the mine's casing should make it sink or possibly explode harmlessly.

Because of strain on the tow system, it is only suitable for speeds up to about 20 knots. Bismarck seems to have had a hydraulic? extending boom to take the forefoot point further forward.


Most ships have two continuous loops of chain passing down from either side of the bow through a ring at the forefoot of the bow.

Don´t quiet understand this, these loops are permanently rigged? Do you have any photo?

The Wikipedia page has a picture of the chains on HMS Glatton in dry dock. The WWII set up was similar.

Yes, I had read the 2006 discussion, but nothing was mentioned in deep on the attachment method.

Anyway, the chains were permanently in place?

This book - "The Paravane Adventure", by L Cope Cornford - tells the story of the design, development and early employment of the paravane device. I believe it can also be D/Led from archive.org in PDF format (useful for search purposes). If you need further info, I have some other material on paravanes lurking around somewhere.

Thanks Byron, I gave it a look.

Anyway, for me the question remains, I do not remember seeing a ship with the chains loops rigged near the bow, may be that´s how it was used in the monitors but don´t think it was the same for others (Bismarck for instance).

Due to wear and tear, rattling and banging etc, while steaming, ships would only install the paravane bow chains which probably needed a diver operating in harbour, to pass the chains through the forefoot ring, before actual war deployments.

The speed range through which paravanes could be used was limited, since too low a speed would cause them not to "fly" correctly and collapse against the hull and high speed and the loads involved might cause them to break adrift.

These chains also caused a lot of additional spray and drag and so where a ship was in transit through deep water where moored mines were impossible they would be brought aboard and re-rigged when shallower waters were more likely to be encountered. All sorts of categories of vessels of different nations deployed them and a famous picture of the merchantman Brisbane Star on a Mediterranean convoy shows an Italian aerial torpedo caught in her paravane.

Paravanes were provided for self-protection for the vessel involved and dedicated minesweepers used similar principles but more specialized gear for their work. If confidence in prior minesweeping was high, maybe the self-protection chains and paravanes would be stowed.

This account on the naval historical society of Australia website shows how when the British Force K ran into a new kind of deepwater minefield off Tripoli, it was the ship which had paravanes deployed, HMS Penelope, which escaped virtually unscathed, whereas others were damaged or sunk.

Thanks guys, now I am getting a clearer picture. What about Bismarck´s and her extending boom? What is the pointed line going from boom to deck in the diagram?

Two of the most knowledgeable posters around here, Tommy 303 and Ulrich Rudofsky discussed the

Diameter of the extendable boom in the nose of Bismarck at

for the story and more pictures. The upshot seems to be the Bismarck spent so little time in waters likely to be mined there are no photos of the chains /wires actually deployed over her bow.

So far as diameters are concerned, the builder's drawings scale to a diameter of about 450 mm around the area where the paravane tube exits at the forefoot.

So, a floating line could be introduced from deck, exiting at the base of the stem, floating to the surface and retrieved over the side with a hook? And then this leader used to pass a heavy wire to attach the paravanes?

Here are some pieces of additional explanation. I used to work in the seismic survey industry and we used similar devices called Barovanes to deploy a spread of compressed-air "guns", and hydrophone streamers covering several square kilometres out behind the ship.


Let me have a go at an explanation. Most ships have two continuous loops of chain passing down from either side of the bow through a ring at the forefoot of the bow.

The loop is continous and can move through rings at top and bottom. The tow wire from the paravane is brought forward along the foredeck and shackled to a link on the loop.


A tow wire to the paravane is shackled to a loop at the bow and then the looped chain chain pulled through to take the towpoint down to the forefoot.

Then the other part of the loop is drawn upwards causing the shackled tow wire end to be dragged downwards to the forefoot. Meanwhile the paravane is lifted over the side using a small derrick and lowered using its lift wire into the sea under the control of a winch.


The ship is underway at a moderate speed. The paravane is lowered into the water further aft and its other line paid out by a winch as the paravane "flies" in the water, close to the surface because it has a buoyant body, not as confusingly drawn, at depth.

As soon as it hits the water it drops back somewhat until the tow wire from the bow is taut, and then hydrodynamic lift makes it fly like a kite laterally away from the side of the ship, its distance controlled by the taut lift wire. The paravane moves out on an arc with the forefoot as its pivot, until the drag from its body, vanes and the wires pulling inwards balance the generated lateral outward lift, and the deck crew pay out the lift wire, until it is slack. It is fully then deployed. The paravane will generate considerable tension in the tow wire increasing exponentially with vessel speed through the water.

Since the pictures show no boom when Bismarck had the near vertical bow with little rake I suspect there was no problem with chains, however when the exaggerated Atlantic bow was rebuilt the forward deck access was several metres ahead of the forefoot and a deployed chain loop would be angled backwards perhaps making recovery more difficult. The boom moves the lower attachment point further forwards perhaps making the movement of the towpoint up and down easier. This is purely my speculation.

Reversing the process the lift line is wound in, and reducing the ship's speed helps this process, until the paravane leaves the water. With no load on the tow wire the bow chain can be hauled up, bringing the shackle to the deck, and the tow wire unshackled. All the components are stowed away until next required.

wadinga
"There seems to be something wrong with our bloody ships today!"
Top
Post Reply
14 posts • Page 1 of 1