by José M. Rico
This photo was taken aboard the battleship Bismarck on 5 May 1941, the day Hitler visited the ship. Can you identify the men in the photo? Click on it to enlarge. 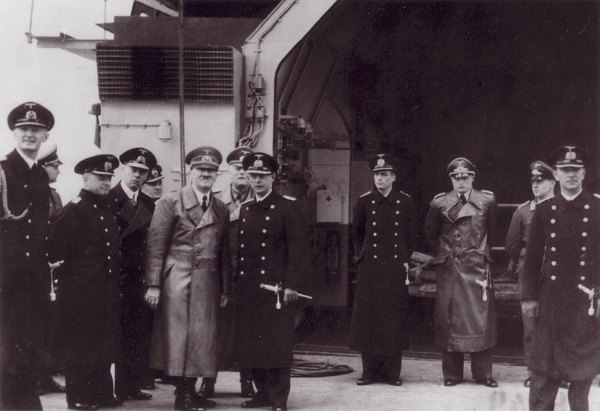 From left to right:

PS: Jose is right: Raeder was peculiarly absent on that day. Actually, some meaning has been attached to that historic absence. Netzband is a very good guess for the short man, I think.
by tommy303
Off hand i would say the first, very tall officer is possibly Lútjens' flag lieutenanty or adjutant judging from the aguillete; 2nd man appears to be a Luftwaffe officer, probably a pilot of one of the Arado's since it seems they group is in front of the main hanger; the third is definitely not a flag officer since he has neither open great coat lapels nor double braiding on his cap, but he might possibly be the Fleet Commander's first staff officer Paul Ascher; the man behind Lütjens seems to be Captain Netzbandt, the chief of staff to the Fleet commander. Hitler, Keitel, and Lindemann are next; the next appears to be a junior officer below the rank of Korvettenkapitän, but i dont recognize him; the fellow in the leather great coat might be Major Grohé the Luftwaffe Liason officer assigned to the Fleet commander's staff. The next is a member of the aircrew it would seem with NCO rank judging from his lack of officer cords on his cap; he also appears to be wearing a Fliegerbluse. The last might be first officer Oels.
by José M. Rico

No. Raeder was absent during Hitler's visit.

However, the following two individuals were present that day and perhaps someone can idetify them:

Hitler's Luftwaffe adjutant Oberst Nicolaus von Below (1907-1983).
by tommy303
at a guess i would say Puttkammer is first on the left as he is the only officer wearing an Adjutant's aguillete. Most likely the officer wearing the leather great coat, third from the right, is Colonel von Below, as this officer appears to be senior enough to purchase a moroccan leather coat
by tommy303
The more I think about it, the more I am certain the officer on the left in nr. 1 is Puttkammer, as he bears the closest resemblance to the following photo of Puttkammer:
http://forum.axishistory.com/viewtopic.php?t=12657
by Ulrich Rudofsky
According to von Müllenheim-Rechberg's book, the junior officer, #9, could be Oberleutnant zur See Friedrich Cardinal. In the German text he is called "1st command transmitting officer" (Erster Befehlsübermittlungsoffizier) and in the English version "gunnery plotting officer". Hitler was very impressed with his presentation, acccording to v. M-H.
by prhayes
The man third from right in the leather coat is Joachim von Ribbentrop, the German Foreign Minister. I believe the officer second from the left behind Lütjens is SS-Hauptsturmführer Otto Günsche, Hitler's SS Adjutant.
by Javier L.

Ribbentrop with a Luftwaffe cap? I don't think so.
by tommy303
Well actually the cap insignia for the Foreign Service uniform cap was not too unlike that of the Luftwaffe's and can be easily mistaken for eachother. Unfortunately, the photo is rather too small to make out the details of the Hoheitsadler. It is possible that, as prhayes suggested, the other non naval officer second from the left behind Lütjens is Günsche, as he appears in several other photos.
by Ulrich Rudofsky
The cap is clearly Luftwaffe, both the eagle and the winged cockade. He does not look like von Ribbentrop and is too young, and there was no reason for his presence. I would say it is very likely the Bismarck's Air Force Liaison Officer Major Fritz Grohe assigned to the Admiral's Staff.
by prhayes
Ribbentrop took part in this visit. It is definitely him. If you look in David Mearns' book "Hood and Bismarck", there is a larger version of the picture. It is clearly Ribbentrop.
by Ulrich Rudofsky
There are dozens of pictures of Ribbentrop on the net and none looks like the fellow in #10. The NSDAP hat eagle was much larger and Ribbentrop was older than that and he commonly wore a general officer's uniform and leather coat. http://www.ety.com/berlin/rbntrop1.jpg Also, I think he would not stand in the hangar next to a lowly lieutenant. Also, that person is not seen on any of the other 10 or so photos taken on that day.
by Robert J. Winklareth
Hi all,

I agree that the person behind Lutjens is his Chief of Staff Netzband. There is a good photograph of Lutjens with Netzband and Fleet Engineer Thannemann on Gneisenau in Elfrath & Herzog's book "Battleship Bismarck." Could the person at the extreme right be Thannemann? All three perished on the Bismarck.

I may be wrong, but I don't recall ever seeing Ribbentrop in any kind of uniform.

by pdfox99
Its been a month since the last post so obviously no one has the answer. José could you shed the light on this one?
All times are UTC+01:00
Page 1 of 2
Powered by phpBB® Forum Software © phpBB Limited
https://www.phpbb.com/